The classic NES RPG Final Fantasy got on the top of the Apple App Store download charts. Within the second week of its launch, Final Fantasy knocked off the casual iPhone gaming like plants vs Zombies and got on top. Though having a comparatively higher price of £5.49, a huge number of retro gaming fans and many newcomers are willing to pay for it.

The major reason for a break through sales of the game on App Store is monopoly. Being one and only on the store, it easily pushed Plants vs Zombies back. Other then the most favorable market situation, launching plan also helped the game to create buzz.

With the record sales of Final Fantasy, the grounds are getting smooth for developers to encash the classic gaming. So, hopefully there’ll be good addition of classic games on App Store in future! 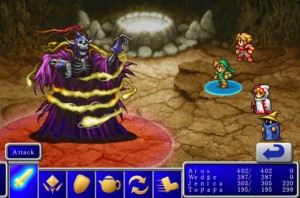